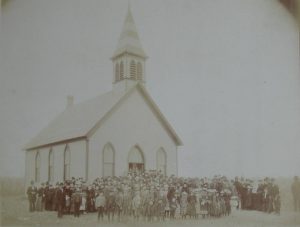 God has strategically placed the Riverside congregation to live out the good news about Jesus throughout the Little Sioux River valley and Sioux Central school district communities...

We are rooted in the stories of three Welsh Presbyterian (Calvinistic Methodist) congregations. Zion Church started in 1873 and later built a small building 6 miles north of Linn Grove and hired a resident pastor. Peniel Church began in 1892 and later built a building 2 miles north of town. Riverside started in the Union Church building which was constructed in 1889 and used by several congregations. In 1907, Zion, Peniel and Riverside jointly hired Rev. Harris for $600 a year. He set out on horseback early each Sunday to hold a service at Zion. He rode to Peniel for an afternoon service, then an evening service at Union Church. 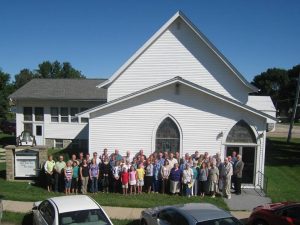 The present Riverside building dates from before 1924, when the Peniel building was dismantled and moved across the Little Sioux River into Linn Grove. It was reportedly cut into six parts, with each part dropped over a haystack and carried into town when the river was low. In 2018-2021, Riverside added an accessible entry, lift and restrooms, renovated the sanctuary, and remodeled the basement, to enhance ministry opportunities.

In God's providence, Riverside has a long heritage as a faithful evangelical & reformed church. For most of its history it affiliated with Presbyterian denominations. After being an independent church for a time, in 2011 Riverside joyfully came into the fellowship of the Central District of the Evangelical Free Church of America www.EFCA.org

Rev. Grant Mangold & his amazing wife Diane became part of Riverside in 2011. They are greatly blessed with two sons & two daughters-in-love, one granddaughter, one grandson, and three 'grand-dogs.' Pastor Grant is ordained in the Evangelical Free Church of America. Before becoming an EFCA pastor in 2003, he was involved in various ministries for ~25 years during a career in international publishing. Previously he served as Pastor of discipleship, technology, and ethnic ministries at the Evangelical Free Church in Alta IA, and seven years on the multi-ethnic ministries task force for the EFCA Central District. His educational experience includes Iowa State University (Ames IA), Multnomah Bible College & Biblical Seminary (Portland OR, highlight: meeting Diane!), American Institute of Holy Land Studies (Jerusalem, Israel), and Covenant Theological Seminary (St. Louis MO).  We are thankful for all that God is doing in and for and through His congregation at Riverside!

As we move into the future, we continue to live our evangelical values, mission and vision!
Come grow with us!