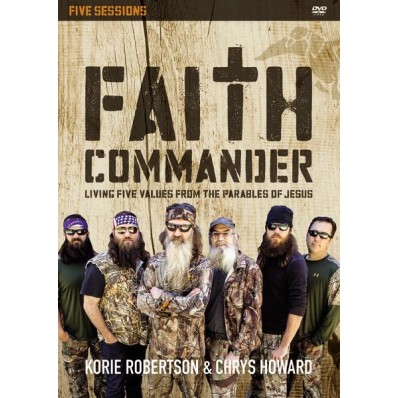 BRING your mounts… Share your stories… BRING your friends…!

“Faith Commander” sermon & dvd series AUGUST 2014 @ Riverside Church – de-camouflage your faith !
https://www.youtube.com/watch?v=qSp1pV2EpKg Join the Robertson men of the hit television show, Duck Dynasty, as they tell stories and discuss some of the Bible’s most-loved parables. In this five-session, video-based small group Bible study, you will learn about faith-based values and how to apply them to your life.

“More Than A Dynasty” – GoodNews Crossway Tract
Every week, millions of viewers tune in to the record-breaking reality show Duck Dynasty, to watch the hilarious antics of three generations of the Robertson family: Phil & Miss Kay, their sons Al, Jase, Willie, Jep, their wives and kids – and of course, everyone’s favorite crazy uncle, Si !

Their story sounds like an American fairy-tale. Talk about rags-to-riches! This family started with nothing–not even indoor plumbing–living in the backwoods of Louisiana. Today they have a multi-million-dollar empire, manufacturing duck calls and hunting gear.

The Robertsons are a family that works together, plays together, and prays together. Their motto is “Faith, Family, Ducks.” In that order.

But it wasn’t always that way.

Over thirty years ago, long before the duck hunting business was even a dream, the family almost fell apart. Phil was running wild–managing a bar and spending all of his free time living for “sex, drugs, and rock and roll”–leaving his wife and young children struggling at home alone.

This was no happy family. In fact, Phil & Miss Kay separated and it looked like they might not be a family for much longer. In desperation, Miss Kay cried out to God and put her faith in him–praying and praying that Phil would do the same.

Then the day came when Phil realized his life was spiraling out of control. And he had a choice to make. He called up a preacher he had run out of his bar the year before, and they had a conversation about faith.

Phil says the way he figured it, he had two problems: his lifestyle—which he knew was wrong, and his destiny—death, which awaits us all. But he was amazed to learn that God already had an answer for both—Jesus!

And God already knew all about Phil’s behavior! The Bible says, “All have sinned and fall short of the glory of God” (Romans 3:23). And the consequence of our sins is death—not just an end to this life, but eternal separation from God (Romans 6:23).

Phil discovered that God says he longs to be reconciled to us. He wants to save us from our sin and set us free so that we can be with him forever: “God shows his love for us in that while we were still sinners, Christ died for us” (Romans 5:8).

That’s why He sent Jesus. “For God so loved the world, that he gave his only Son, that whoever believes in him should not perish but have eternal life” (John 3:16). Jesus died on the cross to pay the penalty for our sins, to take the punishment for them in our place.

Then he rose from the dead in power and glory. Jesus said, “I am the resurrection and the life. Whoever believes in me, though he die, yet shall he live, and everyone who lives and believes in me shall never die” (John 11:25-26).

The love and mercy of God overwhelmed Phil that day. He made a decision that would change everything. He placed his complete trust in Jesus—he believed that Jesus had died for him so he could be eternally forgiven and be changed from the inside out.

But Phil’s decision didn’t just transform his own life, it transformed his entire family. One by one, each of Phil & Kay’s sons made the same choice, to put their faith in Jesus. And they have never been the same since.

Reflecting on all that’s happened since, son Willie shares: “It’s not about our beards, our success, or our hunting skills. It’s the Lord. He keeps us in line… we don’t fight and bicker much, like a lot of families do. And when we do, we forgive one another because the Lord forgave us. That’s why we don’t let our own selfish desires pull us apart. We not only read the Bible and study it, but we actually live by it. We believe that what’s in the Bible is the truth. We live our lives trusting that God’s promises are real.”*

What about you? Have you trusted in Jesus and put your faith in him? Do you want to? You can start by praying something like this:

“Dear Jesus, I know that I am a sinner in need of a Savior. I do believe that you died on the cross for my sins. Thank you for forgiving my sins and for giving me eternal life. Be with me and my family. Help us to live our lives in a way that honors you. Amen.”

* Excerpt from The Duck Commander Family by Willie and Korie Robertson, Howard Books, ©2012.