10:30 coffee fellowship
10:45 new Bible fellowship discussion
“What you can do about what’s happening to our world”

The Foundations: Biblical answers to today’s most important issues
with Ken Ham of AnswersInGenesis.org 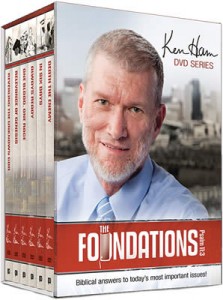 Ken Ham uses modern events as the backdrop for the most important messages of his life.

It was thirteen years ago that Ken Ham was last filmed for a major video series. A lot has changed since then. Thirteen years ago, terrorists had not yet flown planeloads of  people into New York skyscrapers. The American economy was roaring.  Tsunamis had not yet left millions of people asking “why?” America was not simultaneously fighting three different wars. And the president of the United States had not declared that America is no longer a Christian nation.

Today, possibly more than at any time in America’s history, a culture detached from God and willingly ignorant of His hand in creation and world events needs Jesus. But the church is not nearly as effective in reaching the lost as it was only a generation ago. There is a foundational reason.

In this hard-hitting yet often humorous new DVD series, popular Australian-born author Ken Ham uses modern events as the backdrop for the most important messages of his life. By combining his signature talks with cutting edge new graphics and current events headlines, Ham connects with viewers as never before!